The public and private sectors

The last time I wrote a blog post it was on a plane from Miami to Washington DC on one of my other blogs. It was there that I wrote about the support of one of my closest friends, and about how my life as has unfolded in the past few years. At the moment I'm on the Eurostar heading from Brussels to London, so it only seems fitting that I write another blog post, this time about the future and how the support of my friends will help me shape the coming years.

The last time I was in London (for scientific outreach and collaboration on the associated software) and I took the opportunity to speak to some friends about the opportunities available in London. They are both former physicists whom I met during my research at SLAC in California and they have taken two very different paths. Tim completed his PhD and went into financial services, working in the city, whereas Graham completely his PhD, taught in a school and now works in the British Civil Service. The two experiences appear more similar that I would have thought. In both cases their jobs rely on their ability to analyse and manage data, create models, and perform statistical analyses. They both take the skills they developed in their PhDs and turn them to immediately useful exercises, rather than engaging in what is essentially structured intellectual curiosity. 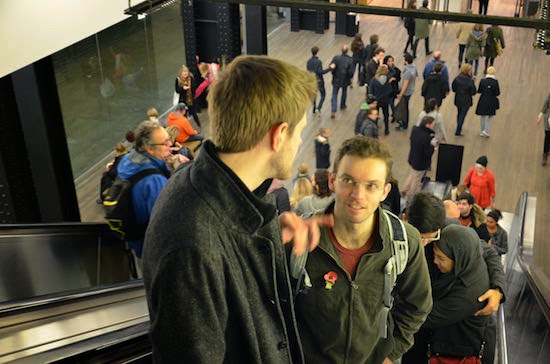 Visiting the Tate Modern with Tim and Graham

While there is something rewarding about working in science, there is also something to be said for working in something less esoteric and more tangible. I often get the feeling that I stopped doing what I do very few people would notice. Despite a rich physics program at the LHC there is a nagging doubt in the back of my mind that there simply aren't enough interesting projects to occupy all the physicists. If we stripped down the collaborations to streamlined sizes that could reasonably achieve the same goals then very few people would really notice that I wasn't there anymore. I don't think the same can be said when our actions have consequences for other people, and it would be exhilarating to once again feel that my work impacted on other people far outside my field of work. (Incidentally I've been active in many areas outside my work that have impacted on others, including my sabbatical year at the student union, creating the LGBT CERN group, and starting a one person outreach effort to try to get more people interested in the findings of the LHC, so I clearly have a need to be productive outside of academia.)

Taking a look at the constrasts of their experiences reveals some of the more frustrating aspects of their jobs. Applications for the Civil Service can take many months to a year to complete, and depending on the path taken one can end up in the wrong stream with respect to the graduate programs. Since I've already got a masters degree, a PhD, had three full time jobs, and lived abroad it would be a shame to end up on the slow stream, especially after so much time going through the application process. On the other hand from what I've heard about the financial services the process is very quick, and considering I'd be moving from one country to another, it may prove to be a little too quick. On the other hand if pay and promotions are performance based then the stream I enter wouldn't matter too much. The two approaches seem to be polar opposites of each other, with the Civil Service being slow, methodical, shrouded in history and red tape, whereas the financial sectors is rapid, innovative, and responsive to changing environments. It's almost worth applying just to get the experiences.

Of course it's also important to look at the nature of the work. The Civil Service is just that- a service for the people, and that appeals to me a great deal. I have always wanted to help those around me, and not just spontaneously, but in a structured and consistent manner. Charity is all well and good, but it's not the same as enacting policy, in fact it's often a poor substitute for it. Having had a history of student politics and formalised support structures I'm very much in favour of policy driven work, rather than sporadic handouts from those who have a social conscience. Putting political biases aside it's clear that execution of public policy can only go so far. The world also needs innovators and investors to improve our society. That's where the financial industries can really make a difference. Whether that's for better or for worse is not a simple or even meaningful distinction as far as i can see. There are those who rail against the financial industry, and mock those who take part as having sold their souls. To be honest I can't much of a difference between academia and finance. The world would be much worse off without either, and there are those who exploit both for their own personal gain. It's true that when bankers play with people's money it can affect the economy in a more direct way, but the particle accelerators aren't cheap, and we burn through tens of millions of pounds each year, with only a few dozen papers to show for it. It's more politically correct to defend academia, but that doesn't mean that writing papers is morally superior to moving money around to where it's needed and skimming a little profit off the top at the same time. On the subject of ethics it's also important to consider the moral implications of working for the Civil Service. Would I want to enact the policies of a Conservative government? If not then how can I in good conscience claim to be serving the public? I can't pick and choose which policies I want to enact, so the morality of working for the Civil Service is a lot more nuanced than it at first appears. Given the choice I'd rather plan for more hospitals and fewer cars, but those decisions wouldn't be up to me. 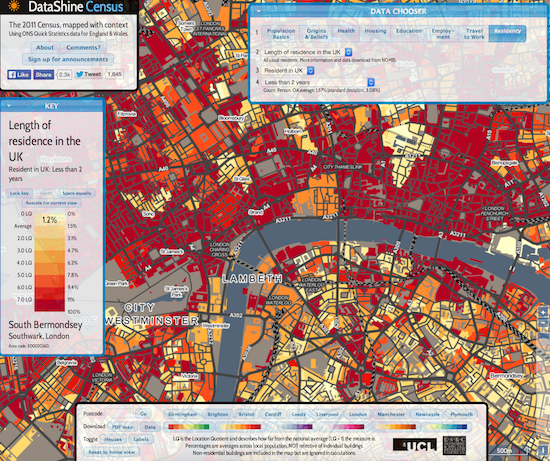 I would love to get my hands on all that lovely data.

Day to day the jobs seems fairly similar in some respects. They work with computers to make predictions and analyse what they can. However the Civil Service has more firm working hours and more reasonable workloads, whereas in finance there are often late nights and hard deadlines, which is much closer to how I work now. To be honest if that was the only difference I'd go for a job in the financial sector. I find the deadlines exciting and they improve my productivity. I recently found myself working to deadlines for some recent classes I had to teach and it improved my output significantly. In the Civil Service it looks as though the software is quite outdated and limiting, whereas in the financial sector I'd be expected to be fluent in C and be able to write my own software. Given those choices my preference is again clear. I'd take the freedom of a C programm over constraining spreadsheets any day. There is joy in constructing something new from a handful of raw materials, even if those raw materials are for loops and xml files.

So would I pursue either kind of job? Perhaps. They are both appealing in their own ways, but this is not an exclusive list of opportunities. I'm still considering a start up opportunity, which requires a lot of "free" time for development. I'm certainly going to keep my options open for now and compare the different opportunities to each other. Making these kinds of comparisons clarifies my thinking and helps to narrow down my interests. The Civil Service would be a "safe" option, and a rewarding one, but I'm not sure that's what I want at this stage in my life. On the other hand working in finance might just repeat some of the more stressful aspects of my current job at the same time as lacking the intellectual stimulation that I crave so much. No job is perfect, although as far as the actual work goes in my current job I'd have a hard time finding something more rewarding. The parts of my life I'd hope to improve by changing field are related to the salary, geography, social and love lives, and medium to long term stability (where staying in one country for more than five years is considered "stable"). Settling down in London or Manchester for a while would certainly address most of, if not all of, those concerns, and I've got two very good opportunities to pursue.

Posted by Unknown at 4:02 PM No comments: