Right now work on CMS is tough. We have tight deadlines to meet and a lot of work to do. This is what happens every time we get new data, and despite the increased workload it is my favourite time to be a physicist. What usually happens is that we target the Moriond conferences in March, but this time there is a December Jamboree for rapid analyses, and I'm working on one of them. The Jamboree and Moriond are my final push to get some physics results out, physics results that I'll be proud of and will make me nostalgic years from now. This is what I've been waiting for the past two years, building up my tools slowly and getting them ready, in anticipation of the data that turns our world upside down. There was some initial excitement over a single very high mass event, which was completely unexpected. Since then we've been keeping an extra look out for high mass events in the data set, and this has only made the curent work more exciting and competitive.

Unfortunately this level of work is not sustainable, even without any other commitments. As one of my friends pointed out in a recent (and probably final) visit to CERN, it's not unusual to do 40 hours of work in two days when things get tough. On top this, there is travel, teaching, and other meetings that take a long time. When I moved to CERN, I moved there to work, and to immerse myself in the life of the lab, which meant more work. It was very exciting and rewarding, but also exhausting. Since moving to Brussels I've been told to restrain my enthusiasm and to not lose myself in work, which isn't why I came here. I came to work hard, to give physics one last chance to show me that I still love it. Looking to the future, I realised that I don't want to keep following the same patterns. Whatever I work at, I'll always work hard and have long hours, but for the next few years I want to be able to set my own deadlines and any rush will be self inflicted. 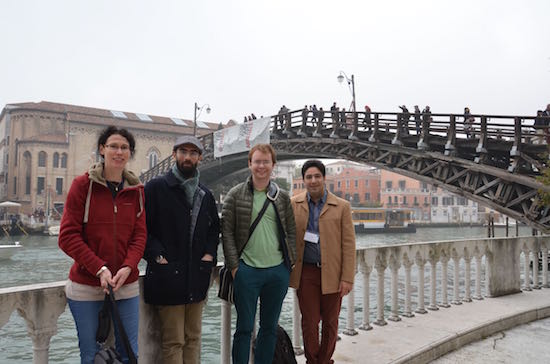 A quick trip to Venice. It was pleasant, but did rather distract from the main event.

So I find myself slogging through the final marathon, a final blaze of glory before it all ends, and for now, I love it. If I had my own way I'd do nothing else, and for a few weeks I'd immserse myself in the work, going from one cross check to another and measuring all the spectra I could get manage. Knowing that this is the last time makes it all the more enjoyable, and more frustrating when other commitments keep me away from this work. These few months are the whole reason I came, and the reason I waited two years for the data. This is what make physics fun, this is what makes physics worth the time and effort.

For the past few months I've been rather busy (hence the lack of updates) with some outreach activities. For a long time I've wanted to create a lightweight particle physics experiment simulator that can run in the browser. An offshoot of this has been a trigger simulator and this has been used in various physics shows across the UK. These shows have developed from the standup comedy I performed last year, into a series of interactive comedic lectures where I write apps that allow the audience to interact. As with any project, it has its fair share of frustrations, but overall I'm very pleased and excited by how it's progressing. The show itself is roughly split in two halves, with the first half discussing cognitive biases, and the second half taking the audience through the scientific method, using the discovery of the Higgs boson as an example. They use the apps to collect and analyse data, and we end the show with the discovery of the boson.

It ticks a lot of the boxes that I was looking for in a project: 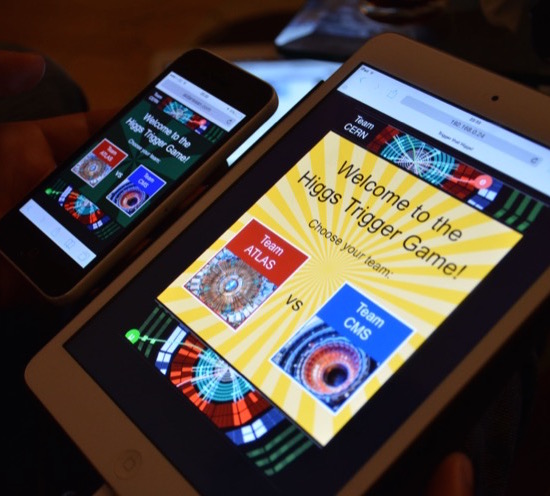 The first draft of the app in action.

To be honest it is quite a workload to commit to, and there are still some elements that have to come together. However the timeline is long, the progress has been quite rapid, and the audiences seem to love the show (and give useful feedback at the end.) As with most of my projects, this is a stepping stone to something bigger and better. Interacting with the public (both the audience and people testing my apps) exposes me to new skills I haven't need to explore much before, and each iteration improves my skills at making the interaction intuitive. For example, no matter how rough a draft is, and no matter how much I tell someone about a project, they still assume that if an app doesn't acknowledge an input then it hasn't seen it. That means for every interaction I need to add something to let the user know things are happening, even in the roughest, most basic draft. Suddenly even trivial changes take a while to implement.

There is scope to extend the project beyond January, and for now I'm ambivalent about doing so. I already have many plans for what to do in the following year and I don't want to overburden myself with free projects. There's also a constant tension between the education and the entertainment, and I want to focus more on the education. Unfortunately that doesn't sell many tickets, and it's harder to deliver. At the same time the most lucrative elements of the show are not so much focused on the science itself, but more about cognitive biases. That's a fun and exciting avenue to pursue, bue it may require the help of someone with a degree in psychology to back up some of the claims we make. 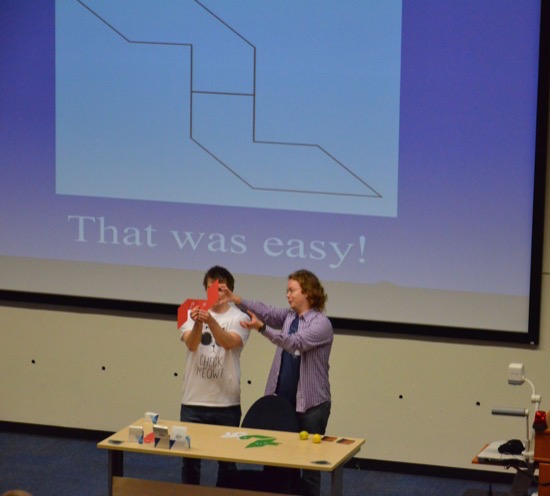 During the show itself.

This project is a nice counter balance to my research, with a focus on communication rather than analysis, ease of use rather than problem solving, and rediscovery rather than research. Even the medium of the browser is different, more direct and fast paced (and in my opinion, more pleasant to work with) than the data analysis on the GRID. That said, the standards are higher. The public expect things to work flawlessly first time, and do not tolerate quick fixes or works in progress.

Much of the work is already done, but there is still a lot to finish up, and with the data analysis in full swing I don't have much time to dedicate to it these days. Right now I'm hurtling across the UK on a train to give a seminar in Liverpool, while my analysis jobs are being resubmitted. There's still a lot of physics to be done between now and the end of my contract and I have to make time for both my job and my outreach. I'm never bored with this much physics!