It's time for a slightly different blog post. In my first year as an undergraduate at Oxford university I took an interest in student politics, wanting to find a way to contribute to the university life around me. I stood for the position of LGBT officer on the college Junior Common Room, a position I held for two years. Within a few weeks I was asked if I wanted to take part in the Peer Support programme, which consisted of listening and communication skills for student counsellors. At the same time I took part in the equal opportunities campaign, Queer Rights, of the central student union, eventually becoming a Co-Chair. Over the course of the next few years I took on more responsibilities in different areas, including support for students suffering from problems with mental health, finance, and eating disorders, and representing physical science undergraduates to the university, as well as contributing to many publications. As this happened I spent more time with the central student union, leaning how it worked and finding out the challenges unique to the institution. Oxford is made up of several colleges, each of which has its own history and its own regulations, which has the result that each one has a different system for supporting its students, its own problems, and there are wide disparities between experiences at each college. The role of the central student union is to support the student common rooms across the university and trying to improve the quality of life of students across the university while at the same time respecting the independence and unique characters of the colleges.

Given all the experience I'd had, how fascinating I found the political environment at the university, and how much work there was still left to do, I decided to put my hat into the ring and stand for a sabbatical position at the central student union, with the grand (if somewhat intimidating) title Vice President (Welfare and Equal Opportunities). I saw off the competition before the elections had even begun. The election process itself was a two week slog, taking up a quarter of the term with evening hustings, touring around the many colleges and finding out what issues matter most to the students and the common rooms. Given that the terms are only eight weeks long, this was a huge commitment alongside normal studies and my competition dropped out before the race even started. I was elected, and after my final exams the two week handover period began. I quickly got up to speed with the rest of the issues facing the student union, and meeting the people I'd have to work with over the next year. 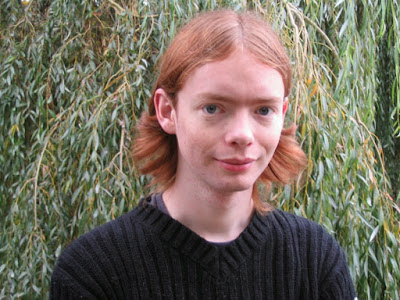 Part of the photo shoot for the manifesto. Calm, collected, confident, reassuring.

With all the preparations complete I had to start on the real work of improving life at the university. It was hard work right from the beginning and took nearly all of my time and energy. During the course of the year I rewrote and published four major handbooks, trained for the student nightline service, assisted with the running of six student campaigns, met with several university committees, racked up more column inches than anyone else in the student press, and spent every spare minute improving the organisation of the student union. During this time I picked a few key projects to work on (because it's impossible to improve everything) and my legacy was to get condom machines in nearly all the colleges, getting permanently cheap pregnancy tests for students, giving the sabbatical officers listening skills, and bringing the university accommodation office to the students who needed them most. I kept up with the student nightline service and LGB society, contributing where I could, and enjoying their company when I needed a sympathetic friend to help cope with the stress. The changes I made to the student union literature outlasted my time there by several years (in fact much of it is still used on the website today!) As all this happened I also had responsibilities to help individual students with their problems, often acting as the final safety net when all else failed. In addition to the welfare support I had to provide, the role was inherently a political one, so all my actions were open to scrutiny and press coverage. I found myself embroiled in the odd controversy, on the the receiving end of politically charged questions and standing before an audience of several hundred hostile students, opposing poorly thought out changes that would cause the support structures to collapse around us. My final act was hand everything over to my successor and leave him with a summary that would enable to hit the ground running. The following autumn I moved on to London and started my PhD. 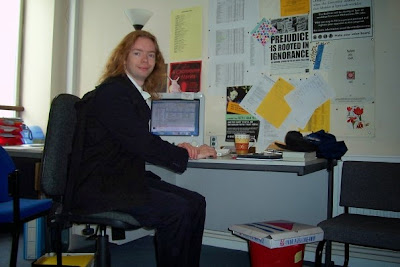 Back to the office, on my graduation day.

After the most exhausting year of my life, I was satisfied that I had left the student union and the university a better place than I found it. I made a few mistakes, of course, and there were things I would do very differently if I could do them again, but that year remains one of the most satisfying experiences of my life. I am extremely grateful to the friends I made during that time, many of whom are still on my facebook feed, peppering my news feed with inspring stories from around the world about the ongoing social struggles and political movements, continuing the good work they started all those years ago at university. Many are now working for charities, or active in political parties, or remain activists in their spare time (as I also am.) I haven't kept in touch with too many of these people, but it brings me a lot of comfort and confidence to realise that I was once a part of something much bigger and more influential that I could be alone, and that in my own small way I remained fighting the good fight. All those issues that I cared about then, mental health, financial inequality, personal health and responsibility, social equality, and all the rest, I still care about. The structures we put in place to meet the goals, and the political machinations we went through to achieve still fascinate me.

Looking back at what I achieved before returning to physics makes me nostalgic, and even years later I'd still check in on the student union to see how things are going. Some problems are the same, some are fixed, some are pathological and will never go away. I feel as though I achieved more in that one year than I have since. Some people see my year at the student union as a brief interlude in my physics career when I went and did something else, and I've tried to see it that way too. However I've found I can't let go of that part of me that is an activist, that wants to tell the world why things matter and that wants to lobby the people with the power and influence. With that context, it seems like the physics research might be the interlude in the middle of something much bigger, or at least a small part of something else. It's easy to forget that I had a "former life", which makes it easy to forget that dramatic changes of direction are even possible, let alone desirable in my future life. I still don't know what I'll do next, but I want to be something else that matters and lets me give something back that I haven't yet given.