More jobbortunities (and a couple of comics)

Recently I've come across a couple of job opportunities via family and friends. First of all, my step father suggested I look into the Lean Six Sigma program, which specialises in reducing waste in industries. It would require some training (at some cost) to pursue this as a career, as well as meaning a dramatic change in the line of work, but it does look rather attractive. I do like this kind of problem solving, and cutting out the inefficiencies from a process is very satisfying. It would also give quite a good variety of work, as once a problem is solved it's generally solved permanently, and attention must go elsewhere.

In the meantime I've also been contacted by a few friends involved in software engineering about possible jobs. This includes startup work, a permanent position solving combinatoric problems, and taking on some freelancing. One of my friends also suggested I take on some science policy work with a colleague. So there are plenty of leads to follow up where I would not have to create a new social life from scratch again.

Since these two paragraphs didn't warrant a post on their own, here are some comics that made me smile lately:

First of all, a Zen Pencils comic about have the artist, Gav, found his true calling. I can't help notice that the character in the comic spent a long time developing the skills he really loved all the time. It's not as though the time he spent not drawing for a living were wasted, as he was developing his real interest all along. I suppose that's the point of the comic.

And another comic that has been doing the rounds lately. This time it's about people going from the mundane to the amazing relatively late in life. Not that particle physics is mundane, far from it. It is, however, not hitting the spot anymore. I'm not lost either. I don't know where I'll be a couple of years from now, but I know the kinds of things I want and don't want. 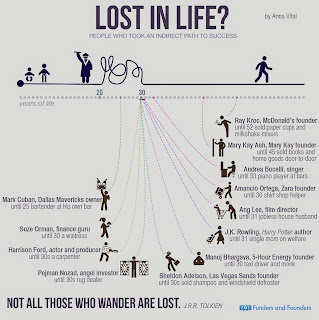