I haven't posted much on this blog in a while and that's mostly because I've been too busy. A couple of months ago I was working very hard in the office, the spending a lot of evenings out having beers with graduating students (something I do more for their sake and the sake of the future of the field than my own sake), and generally not having much rest. This is how I like things, I love to be active and I hate being bored. It was around this time that I caught a virus while I had to go to CERN to present a talk. Without time to rest and recover I found myself on the plane unable to use my hands as they cramped up and went very cold. I was taken from the plane in an ambulance, and around an hour later I was able to get myself to CERN and spent most of the trip sleeping 16 hours a day (while having more work piled on me). I took most of the next week off and rather than sit at home for a week I invited my mum to visit Belgium. Since then I've been playing catch-up, and it's only now that I find myself in a state where most things are finished and I can look to the next tasks. 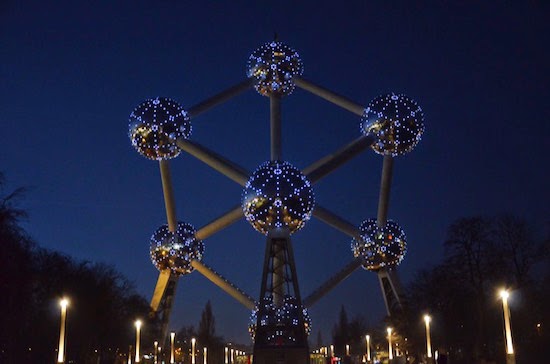 Not wanting to waste any time, I spent my sick days showing my mother the sights.

This isn't particular to physics and I'm quite sure I'd have faced similar problems in any job I chose. I'm not very happy with how the aftermath was handled though. My boss acted as though excessive work had caused me to catch a virus, rather than this being bad luck. (I hadn't been this ill in about twenty years.) On top of this I was given some additional work which I simply didn't have time for, while at the same time was being told that the most important work wasn't urgent. Time and again my boss has told me not work so much on the ntuple maker that I developed, until I tell her that every other part of my work depends upon it and that it greatly speeds up the rest of my work. She seems to have a very poor understanding of what my work entails or what I need to complete the tasks which is incredibly frustrating at times. At the time the ntuple maker had five different releases for five different releases of the central software CMSSW. Each release corresponded to a different aspect of my other work, so maintaining the code was essential to everything else.

13 branches and 6 releases, upon which all the rest of my work depends.

These problems are made even worse by some serious gaps in the technical support. I've had roughly five tasks running in parallel that all require my time, CPU time, and disk space. While I've got plenty of CPU time at my disposal there isn't enough disk space to perform more than about two tasks at once. As a result if I work on one of my tasks I have to delete the files for another one to make space, perform my work, then regenerate or copy the files over for the first task again. All this eats into my time and ultimately makes me significantly less productive. There are some perverse design choices made by the local IT support, for example not making /tmp space available, or giving us access to large amounts of disk space without being able to use it interactively. Rather, I need to copy the files locally and work with them there, so I spend hours waiting for files to be transferred.

An extra terabyte could solve nearly all my problems.

All of this seems to come from an attitude that I shouldn't try working too hard, and that I shouldn't try to be excellent at my job, and I find that not only frustrating, but it makes it feel like I'm wasting my time here. I moved my entire life to Brussels for this job and I want to make it worth the sacrifices. Instead I find myself confronted with arbitrary limitations on what I can achieve technically, and being told to not work on the very things that make me more productive and efficient. Even when I have to take time off and play catch up the resources that I need are not available to me. With the right resources I could be at least twice as productive, and in fact one of the most frustrating aspects is that once I'd finished working my way through the backlog the actual physics just took a matter of hours to get some very interesting and useful results. This is work that my boss had been telling me to abandon, despite getting interesting results within a few hours. If I'd had an extra terabyte of disk space two months ago I'd have had those results two months ago. It's simply a waste of time working in these kinds of conditions, and if things don't improve I might just invest in my own hard drives to store the files I need.